All about excessive earwax

Everything you need to know about earwax

Specialised glands known as cerumen glands actively create earwax deep under the skin of the ear canal. Connected to the glands are the cerumen ducts which allow the earwax to travel to the surface of the skin to be deposited in the ear canal via the numerous cerumen pores. Excessive earwax can occur if this builds up

Earwax plays a very important part in protecting our ears by reacting to foreign bodies and surrounding them. Once enveloped the captured organisms, dead skin cells and various other debris is removed from the ear canal by the ear wax migrating outwards.

We know that earwax is a normal and necessary process of protecting our ears. It repels insects, maintains normal PH levels and traps dirt and dust from the environment.

What to do when we develop too much/excessive earwax

If left untreated earwax can continue to build up. This makes it even more difficult to remove and leaves ears feeling blocked and reduces your hearing. In some cases the blockage can be so severe it can cause a feeling of constant pressure and pain.

Here are some typical indicators of earwax build up:

Earwax can be particularly bothersome for people with hearing aids because it causes them to whistle or can even stop them working.

These pictures compare an ear canal full of wax with a clear ear canal that allows sound to travel without obstruction to the eardrum. 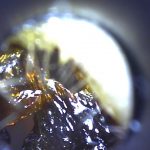 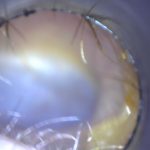 Earwax is the leading cause of whistling hearing aids

The whistling will only stop once the earwax has been removed. The sound produced by the hearing aids can then travel efficiently through the ear canal without whistling.

Thank You!
Your message has been sent successfully.